During my last week in Kibuye in November, I had the privilege of having my own "bad dream" come true.  I got up to present at our hospital's grand rounds, in French ... and quickly realized that ... I don't actually speak French.  Okay, I speak a little French.

Shortly before my arrival in November, the team at Kibuye decided it would benefit the medical students, national doctors and the rest of the hospital staff to hold a weekly grand rounds, an hour lecture on a specific topic, usually given by one of the missionary doctors (although we hope soon the national doctors will be able to participate in this as well).  My first two weeks in Kibuye I learned a lot about cranial nerve palsies (from John) as well as evaluation and treatment of abdominal pain (by Jason).  On my third week, Jason asked me if I would present.  I chose to present on the topic of "Anesthesia for the Pregnant Patient".  Jason offered to find someone to translate for me, but in my foolishness, I declined, thinking it would be a good opportunity for me to practice my limited French ... in front of the entire hospital staff.  Sometimes I make poor decisions.

Through the use of my broken French, a lot of hand waving, and a bit of interpretive dance, I got through it, and hopefully my next presentation will be a bit more polished. 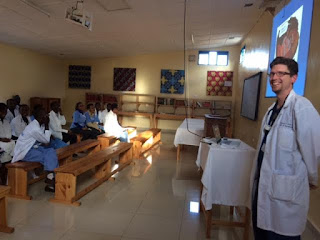 If I smile long enough, perhaps they won't notice I forgot what I was supposed to say. 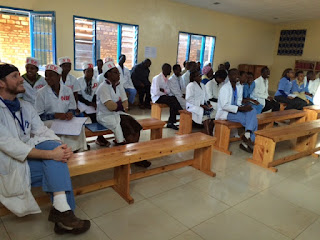 I think this photo really captures the joy and laughter my French brought to the room.
Posted by Gregory Sund at 8:37 PM 3 comments: 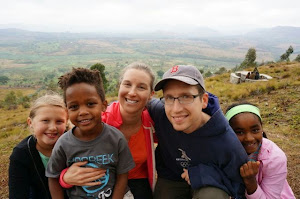